It's not often when family visits us on this side of the state, so we were pleasantly surprised when we got a phone call from my oldest son saying he and DIL were going to stop by. They were coming to Detroit to watch a Red Wings hockey game and wanted to come spend some time with us afterwards.

They got here later than they had thought and we only had a little bit of time to chit chat. Then we headed down to Toledo and the Golden Corral restaurant for dinner before they had to leave.

It was really nice to see them!

This is the most recent photo I have of them which was taken on Easter when I went over to their side of the state. 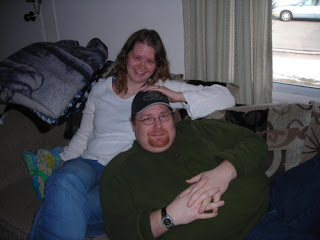 The Red Wings won their game, by the way. Son and DIL had a good time there even though someone spilled beer on DIL's coat and son's shoes. (At least they weren't vegan shoes.)
Posted by Barb

Yay! I'm glad you all had a nice visit. Nice visits are better than the one I had...

It's always good to catch up with family. That's a great photo of your son and dil.

I hope y'all had a wonderful visit!!!

I am curious...how long does it take to drive from one side of your state to the other? It's nice that you were able to have to visits so close together!

I'm so happy you had some time with them! ( and a yummy dinner too, from what I hear! sure beats my tuna fish sandwich *grin*)

I liked this post...there is something beautiful about son's...glad you had a great visit...I miss mine dearly...