What a week. Lots of (ok, some) new things and changes..

As I wrote in my last post, I've been working on cutting back on smoking. I'm reluctant to say I'm "quitting" because that can be a scary word and "cutting back" is something I'm more comfortable with.

What I've decided to do, other than what I wrote in the last post, is to not smoke when I'm doing anything else. That cuts out a LOT of smoking. While I'm cooking, at the computer, watching TV, getting dressed.. WHAT?? Yeah. I used to smoke while getting dressed. I'm trying to go outside now, too. Not to get dressed. To smoke. Sheesh.

I seem to do really well during the day. It's in the evenings and nights that I find it harder. I break down and will have one (or two) at my desk when me and hubby are playing World of Warcraft.

I still think I'm doing pretty good though considering I've smoked maybe two and a half packs in the last five days when in the past I may have smoked anywhere between 6 - 10 packs. Oh and.. thanks for all your encouragement!!! It IS appreciated.

Hubby was supposed to have this past week off, but at the last minute they said he and the other Major Model Trainer had to come in, along with a few of the bosses. Everyone else got the week off. It was a layoff week actually and although he would have gotten 95% of his pay if he'd been home, this way he doesn't have to deal with calling unemployment.

He had fun last weekend. He took his remote control car to the area behind our apartment complex where a subdivision is being built. There's only a few homes and lots of open space and lots of big piles of dirt. When he came back he was grinning ear to ear and saying how the car had "gotten air" sailing off the top of the big piles of dirt.

He took the cover off the car and washed it in the kitchen sink, but the car itself is too big for the sink, so it got a bath in the tub... 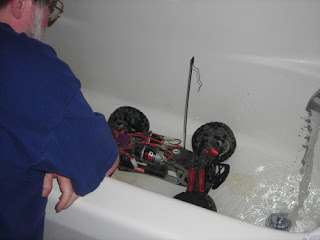 The weather finally warmed up enough for me to go get some flowers to plant. YAY! I'm awful when it comes to names of flowers and plants so I just find some pretty ones with varying colors then read the tags to see how tall they'll get and how much sun they need.

I've already planted what I bought, but still would like to get a hanging basket with either flowers or a fern. I think we're going to put out a hummingbird feeder this year, too. (I'll take pictures soon.)

My daughter has two daughters of her own. The oldest one lives with the dad. The younger one lives with the (different) dad and daughter's son. Daughter currently is living elsewhere while some things get straightened out. It's complicated. Anyway, daughter sent me this picture after Mother's day. It was the first time I had seen daughter with both of her girls and the first time I had seen her girls together.. 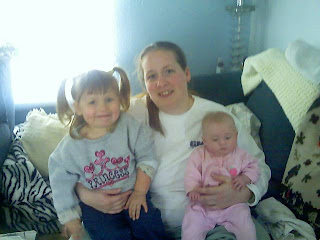 Finally, here's something I think we should all try to believe.. 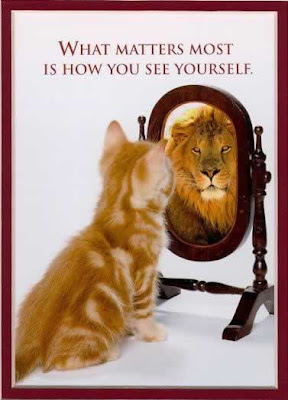 Wish you all the best with the cutting back. I am so glad I never started smoking (I am too cheap) because I am sure I would have a hard time giving it up.

You're doing really well with cutting back on your smoking Barb - Well Done! Eventually you won't be having any at all without even noticing!

Love the photo of your daughter and her babies, and of "hubby washing his car"! LOL

You already know how proud of you I am, so I'm not gonna get 'all mushy'... OK, maybe just a little bit - I LOVE the pic of 'the girls' LOVE LOVE LOVE it!

So, if I come help you plant flowers, can I play with Mike's car? COME ON!!! What's a girl gotta do? OK, OK - Mike - I will get you a shirt like mine (you know which one I mean) if you let me play RC car with you :-) (sometimes you just have to resort to bribery).

That final picture says so much for all of this....thanks I needed that.
The granddaughters are lovely.

I am so relieved to hear you get dressed before going outside! :P

I loved the pic of Mike giving his car a bath. Boys and their toys!

My mom has a hunningbird feeder, and she loves watching them come and eat. They are pretty cool little birds.

The babies are beautiful!

good for you! baby steps!!