This is going to be somewhat of a lackluster post because I'm rushing around fixing dinner and stuff while writing it. This is the first day I've really felt like doing anything since I got sick early last week and I have SO much catching up to do!

I am however going to redeem myself by using both words this week. (Go, me!)

I am one of those people who tend to see things as either black or white, right or wrong. It's harder for me to find the gray compromise area, which is odd with me being Libra. (Libras are the ones who are supposed to see all sides.)

Told you this was going to be a lame post. (Laugh.) Ohhhh.. wait.. I DO have something a little better!!!

Last week we had some time to kill while waiting for my prescriptions to be filled so we drove around. We wandered over by a car dealership to see what they had. I ended up test driving a 2007 Ford Escape and we both liked it so much we filled out the loan papers and crossed our fingers.

The call came the next morning that the loan had been approved and now I have new car! And it's neither black or white. In fact it's gray like the one in this picture. (Maybe a little darker..)

I guess in this case I was able to find the gray area. 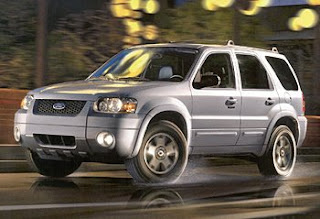 \Congrats on the knew car - I could hear the song but I am assuming its the Piano-keyboard song which is the first that popped into my head when I read this week prompt.

Congrats on the car! Did you get the hybrid (pricier, but 50% better fuel economy)? Enjoy it! I am still grooving with my new car... which I bought almost two years ago. MiniZoom is my baby. *happy sigh* I hope you feel the same way about your car for years to come!

Congratulations! :) Happy HOT day, and thank you for putting together this meme each week :) Its always so much fun to participate in :)

I’m glad you’re feeling well enough to create a post while scurrying around to make dinner. Unlike you, I always see shades of gray but love to WEAR black & white. Congrats on the nifty new car ;--)
Hugs and blessings,

Glad to hear you're at least feeling a bit better and WOO HOO on the new car! That's terrific -looks really sharp too. Making me jealous here. Guess I'm going to have to try to find a few (actually a whole hell of a lot) more paid postings to do and save up for a new buggy huh? Either that or hit a big super lottery jackpot. Either idea has a snowball's chance in hell of coming through for me though.

woo! new car. :) We're going to get a new one soon too. We're looking at a Honda Element though neither of us has test driven one yet.

I almost wrote about seeing things in black and white. I think I have shades of gray, too. And I am a Libra! Hope you can visit me.

I'm pleased you're feeling better. It's often so hard to find the gray area between black and white.

Congrats on the new car!! I always love having a new vehicle...so much fun! Enjoy it Barb.

We have the same video this week. so much for thinking out of the box :)
Thanks for making me the spotlight blog and congrats on that new car.
Who knows if/when I get a job, a Kia may be in my future.

like how you said you found the grey area lol. cool car. bet you are excited now!

I was guessing you'd come up with Three Dog Night's "Black and White" but this was also a very appropriate video choice.

Congrats on the new car! How exciting! I bought one last year and like you, it's gray. Err ok silver! LOL

Since I just "Bloggy-met" you...not sure why you were ill, but hope you feeling better now. And congrats on the new vehicle!

I'm like you and see things as black or white, with little room in between for gray areas.

Congrats on the new car!

I am a Libra also and I see things as black or white...no gray areas! GO LIBRAS!

Congratulations on the new car!

I hope you get some rest. Beautiful car!

A new car smells so nice.

A new car always feels like a new life to live! Great choice for the prompt, especially as it was a lovely shade of grey!

So glad you're feeling better ... as for the post, I laughed out loud when you revealed the color of the car! Good song selection, too and I'm glad your husband got the opportunity to air guitar to mine! Air guitar-ing is an excellent skill to hone. Enjoy!