Me and hubby traveled to Yellowstone National Park in 2006. It was beautiful and I think everyone should go there at least once. One of the high points was when we rounded a corner and there was a moose standing on the side of the road.

I'm not sure what is was about the moose, because we'd already seen buffalo and other animals, but hubby pulled over quickly, grabbed his camera, and was off to take a zillion (two or three) pictures of this moose.

The rest of the trip he kept saying, "I saw a MOOSE!"

After we got home, we were looking through the pictures and I looked at the moose picture. I looked again. I said, " Dear.. I think that's an elk." His face fell. He realized I spoke the truth.

Let me tell you. We saw SO many Beware Of Moose signs. We drove up, down and around Vermont, New Hampshire and Maine. Did we find one? Nope.

Instead I bought a postcard with a moose on it and took a picture. That will have to do for now. It looks real, though, doesn't it? (Smiling at Misty because I know I cheated.) 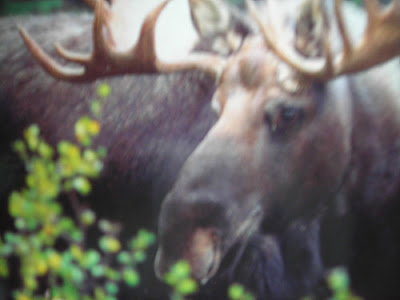 Bwahahahahahaha - I love this story. You two crack me up.

I have to admit, I would have been thrilled to see the elk too!

hehe..I would definitely be happy if I saw a moose up close :D

Mine is up HERE. Hope to see you there! Happy CC!~

Great story behind the cheat though. :)

Cheating or not, it's a good looking moose. Love your story!

Ramblings of a Villas Girl said...

Ah poor hubby. So excited only to have his spirits dashed. And then a second time. In moose country and not even seeing a real live moose. Well cheat or not, this is a lovely picture and funny story. Lisa

You didn't see a moose in Maine? Unbelievable. LOL That's where I've see them. ;-)

This Is My Blog - fishing guy said...

Barb: Funny story, that is a problem when you see a big animal and are not sure about species.

lol!!! What a story. It's a good picture anyway!

That is a cute story and how clever of you to take a photo of a photo LOL .

Yellowstone IS a beautiful place isn’t it? I suppose ya gotta do what ya gotta do ;--)
Hugs and blessings,

I would get excited if I saw either one...even a deer. lol

Yikes...you wouldn't want to be that close to a moose, I am sure!

I've never seen a moose in the wild either, so you're not alone. :)

Moose sure do get some aw but they are sure bull headed.

You know...I've had the exact same problem with elk around here. Denis and I drive all over creation and see tons of yellow caution signs with a bull elk's picture on them, and until this past June, I'd never seen one of the darned critters! Do you want to know why I saw them that evening in June? Because I didn't have my camera with me!!!!