A Thanksgiving To Remember

My parents had gotten divorced when I was four years old and had each since remarried. The court gave custody of me and my brother and sister to my dad so we lived with him and his wife and went on regular visitations to my mom and (evil) stepdad's place. We had been at my mom's for Thanksgiving that year.

I remember my mom and (evil) stepdad bringing us home. I remember I was excited to tell my dad something or other. I called out, "Daddy! Daddy!" as I ran into the kitchen. There was momentary confusion as I saw both grandmothers, my dad's mother and my stepmom's mother. At ten years of age I guess I didn't realize they even knew each other.

There was a small commotion at the door because my mom wanted to talk to my dad also. Perhaps to talk about Christmas visitation. My stepmom was saying now wasn't a good time.

I remember wondering which grandmother I should greet and hug first. They were both saying "shh" to me until my mom and (evil) stepdad leave. They do after a very short time.

My stepmom said for us kids to follow her back to her bedroom. We sit by her on her bed. And then she tells us..

She and my dad had gone to see a University of Florida football game. As they were walking through the parking lot on the way in, my dad said he felt faint. Then he fell to the pavement. He'd had a heart attack and the doctors said he was probably dead by the time he hit the ground.

This was our last family picture. It was taken Easter 1966. It shows my dad and stepmom, my brother, my stepbrother, me and my sister. (I'm the one with the red bow.) 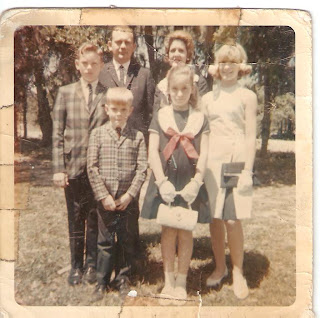 One month later the family I knew was torn apart. Me and my brother were sent to live with my mom and (evil) stepdad. My sister went to live an uncle.

(This post has nothing to do with Christian books.)
Posted by Barb

my great grandpa died on Thanksgiving '99 :-(