The day after we got her I took her to the vet for her first shots and such and she weighed just under eleven and a half pounds. Tonight I weighed myself, then did it again holding her and subtracted the difference. According to that she now weighs sixteen and a half pounds!!!

Prepare to be bombarded with pictures every week as she grows. (Smile.)

At 6 weeks the day we brought her home. 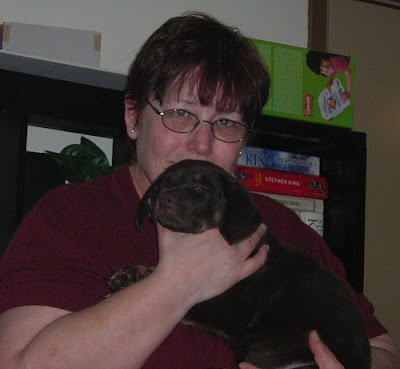 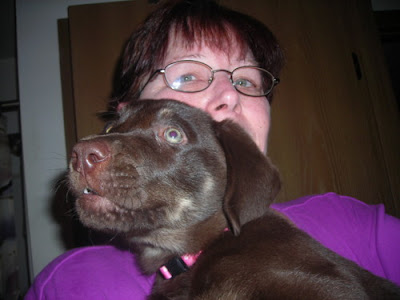 A couple days ago looking over the baby gate I
caught her climbing over last week. 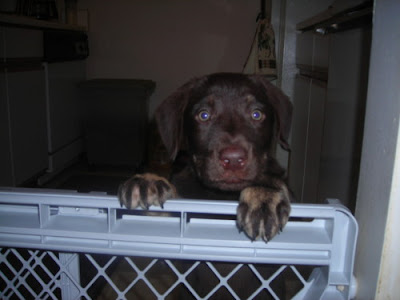 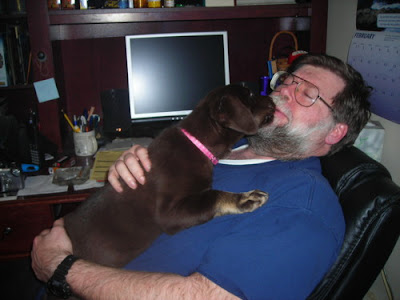 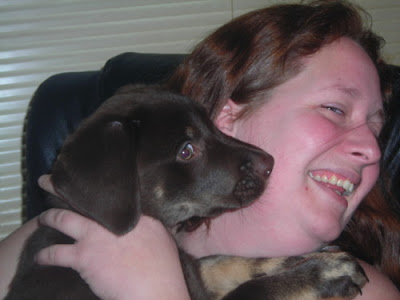 My daughter is still here for a visit, but I'll try to visit as many of you as I can.

I LOVE labs and chocolate ones are beautiful. ;-)

I want a puppy!

Chocolate labs are very wonderful dogs. She is a real sweetheart!

she is so so cute, and I bet you get so much exercise..Your header is unique!1sandy

aaaahhhh she is so beautiful! And looks VERY healthy and happy! Enjoy!

Aaaww, what a cutie. And she still has those babyblue eyes - or will they stay that way?

That is such a neat CC post, how exciting, a new puppy. Great photos, she is a little darling isn't she? Would love to see more photos of her so bombard away :)

She is so cute and growing like a weed!

What an adorable puppy! Never say Never on the lap dog part though. We had occasion just yesterday that our 7 year old 80 pound lab decided to curl up in his dad's lap (it'll also be next weeks camera critters).

She is adorable, She is going to be huge

Very cute puppy! We have a yellow lab who's 2 now, and she's a wonderful dog. But beware, if your pup is anything like ours was, she'll be teething on everything in site for the first 6 months!

She got big and she is so friendly! She's adorable!

she'll be a lap dog no matter her size!
she's adorable

She is adorable. My daughter had one and they are like kids, And can find there way home by there self. They get attached to you too.

It WILL happen... how can you resist??? What a doll she is! She's a little luv-bug too.

Hannah Banana Rose is a beauty. She is growing like a weed.
I can't wait to see her growing up. Keep the pictures coming. Lisa

She's areal sweetie and so loving.

I don't have a critter to do this meme but just had to say...your doggie is so darn cute! And wow! Gonna be a BIGGGGG dog!! hahahaha

What an adorable QT!!! She reminds me of Molly as a puppy though different in color. I actually was looking for a chocolate when I found my little white beauty with yellow accents ;--)
Hugs and blessings,

such great shots skits! I love your face! I feel like I know you forever!
hannah banana is so cute and so fun! xo