And The Winner Is..

The winner of the last Caption This was.. *drum roll*.. Misty!!!

What a coincidence since we were just on vacation and met her (see post below) and I happened to have given her not a fake prize, but a real gift. Which I can use as her fake prize..

We had originally thought about giving her a box of Band-Aids since she often jokes about them being all she needs to wear instead of a bra. When I told her on the phone before we met that we were giving her a gift she laughingly said it better not be Band-Aids. I thought oops and we had to look for something else. 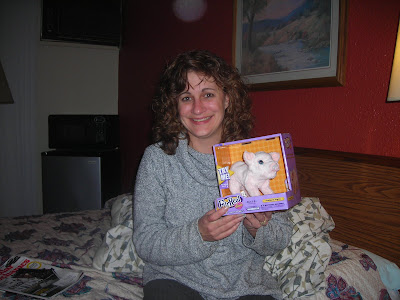 Actually the noises this piggy made scared her a bit. (I can't imagine why..)

She may claim it has Mesothelioma or something and send it off for medical testing. Long and extensive testing..
Posted by Barb

Darn thing sits on my bookshelf and watches me... Oh yes it does too! You were there - you saw it making that bag shake and you heard it grunting long after it had been put away! It's possessed I tell ya! Damn pigs anyway!

Cool!!! your adventures sound fun! you guys made i pretty far! I can't wait to see more pics.

loved the pic of you and misty! so happy you got to meet! She looks so sweet too!
welcome home skits!