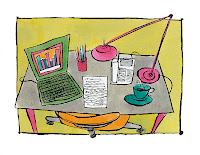 Sunny Days: (Sweeping the clouds away..) The weather has been unbelievably nice here the last few days. I haven't wanted to sit at my computer or in front of the tv. I've wanted to be outside.

This is not the norm for me as I am usually routine driven and my comfort zone is doing the same things, the same way, day after day.

But not in an obsessive/compulsive way. *Blink*

I've gotten out the summer things.. lawn chairs, the hummingbird feeder, twirly stick in the ground things, the wrought iron poles for hanging flower baskets, planters for other flowers. I've some good ideas for what kinds and colors of flowers I'll be getting in about a month.

All this fresh air and sunshine hasn't hurt my state of mind, either. It did provide me with a bit of a sunburn yesterday. Nothing a little aloe can't help.

Court: I posted a couple days ago about a final court day for my daughter and placement of her son. I said it was likely he would be permanently placed with the foster dad he's been living with. (Foster dad is my daughter's ex-boyfriend.)

Well I was wrong. After spending two days trying to get my daughter to return my calls, I texted foster dad's cell and shortly after he called me back on my land line. He told me the court had decided to postpone the final hearing for 90 days to see if my daughter could get with the program.

I know some of you will be glad to know we had a long chat and cleared up some earlier problems and vowed to keep the lines of communication open. It felt good that I was able to do this.

Hannah: Hannah had her second puppy obedience class yesterday . This was the third class for the other puppies.We'd missed the first class so went an hour early to go over what was taught that week.

Our biggest concerns have been her leash walking (which she doesn't do well) and how she jumps up on us and others (which she does too often and with great enthusiasm). Sure she's only a puppy, but she's a BIG puppy and we don't want bad habits to continue. Of course we're smart enough to know that anything most of the issues have been taught or encouraged and not corrected by us. We just needed to know more effective ways of doing things.

We DID work with leashing walking. YAY! We worked on sit and down.. things she does fairly well already. We started on "leave it" and "drop it", too.

I owe thanks to Sanni and Jersey for sending me an email with other good tips!

After each class is puppy play time. We let our dogs off their leashes and let them play. (Obviously.) We're not to get out of our chairs.. to let the teacher step in if and when it's needed. Yesterday Hannah got somewhat overzealous with a smaller dog and had to be put in time out for five minutes to calm down.

I get the same way when I meet others, too. I know ya'll know this already. How I get the STFU looks. *Smile*

Tomorrow morning she goes in to get spayed. We'll be able to pick her up late afternoon. She'll need lots of love and reassurance that the boy dogs will still find her attractive.

Remembering: This reminds me of another dog I had when my kids were younger and still at home..

Our dog, Suzi, had caught her tail on something. It was bad and I rushed her to the vet. The last six inches of her tail had to be removed and stitched. She stayed overnight at the vet while she got IV antibiotics.

My younger son went with me the next day to pick her up. He was probably around ten-eleven years old. He sat in the back seat with Suzi, holding her head in his lap.. talking to her calmly.

I got a tear or two in my eyes, but also a smile on my face, when I heard him tell her not to worry. That the other dogs wouldn't make fun of her.

Blogging: My blogging has kind of taken a back seat for a while. As it should. I'm enjoying life away from the computer too much right now. Not enough that I don't want to make a post now and then, but I haven't been good at visiting other blogs.

exactly how it should be.

i feel the same way.. when the weather is beautiful.. I want to be in it!
blogging has taken a backseat for me too lately.. I am not spending the same time reading blogs either. that is upsetting..You hate to be behind on your friends lives.. but we have to live life first, no? Hope u enjoy the beautiful weather!

I stayed away from the computer for most of the day yesterday, and I was amazed at how many things I got accomplished! It was SUCH a good feeling to be able to cross some things off my to-do list. So, I completely understand what you are saying!

'Cept, there is NO way that my God-Puppy EVER deserves to be put in time out... that other little thing shouldn't have started crap with Banana! I'm just sayin!

Every little bit you're willin' to blog is a good thing. :)
So much stuff we need to do with the furlings when we have $. Obedience training is only part of it. *sigh*
I'll keep my fingers crossed for your family.

Hmmm. I was going to tell you that the nice weather here today too almost has me in a mood to venture outside but then I looked out the window now and saw that it has changed from the bright sunshine of earlier to looking a lot on the grey side at this point in time. Yucky in my book anyway. Glad you made that phone call and hope things continue in that vein for you and with him. And as for Hannah, just hang in there! My friend here who has had several labs say that it tends to take them a lot longer than other dogs to outgrow some of their lovely puppy behaviors but when they do, they are fantastic pets! Now, if you do venture outside, don't hog every last bit of the sunshine -send a bit of it east to me, will ya please? Either that or you'll have to spend extra time outside cause you'll have to be doing that for both of us then!
Peace.