Misty wanted some Doritos and a Dr. Pepper one day while she was at work. Since I have kind and loving (cough) pets my snail volunteered to bring her those two things. After a day and a half the snail was still in Michigan. Misty said it might as well go to Ohio because she would be there in the not too distant future. The poor snail had to reverse direction and head towards Ohio.

The goldfish, feeling sorry for the snail, went to help. It wasn't long before they conspired to skip Misty's eventual destination and go to Cedar Point, the amusement park in Ohio. I heard the snail was looking forward to the water slides. That may have just been a rumor..

Now to get to the part about my infamous guinea pig, Gina. I discovered it was GINA who came up with the evil plan to divert the snail and goldfish. GASP! No way! Not MY sweet and innocent guinea pig!!! It's true though. Look at her pretending to be Snoopy.

Misty told me Shamu at King's Island amusement park was disappointed. Shamu had wanted to meet my three pets. The pets declined to travel farther so Shamu came to visit them at Cedar Point. I can only assume the guests at King's Island will be dismayed at Shamu's absence. 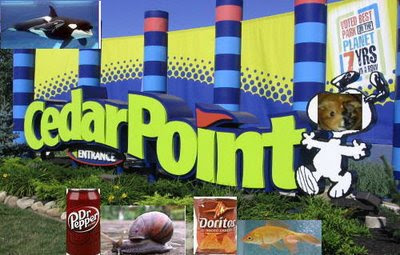 The fine print: I don't usually blog on weekends and so I probably won't reciprocate visits. If you don't want to comment on mine, that's ok. I understand. I just love Misty so much that I want to put something up for CC. (Smile.)
Posted by Barb

Bwaaaaaaaahahahahaha You FORGOT to tell everyone that they drank my Dr. Pepper and ate my Doritos!!!!!!!

this is a great presentation!!

That's great! I love your sense of humor.

You do have the most naughty guinea pig I have ever heard of... a lot like my long since departed gerbil Bozo, who loved to chase the cats in his clear rolling ball.

Odd and funny... Oh, I have an animal posted this weekend. So you can stop by on Monday to see...

Have a great weekend :-)

Hahahaha, where do you come up with these things?