No Help At All

Please scroll down for today's Heads Or Tails post.

<><><><><>
I have been the most consistent one when it comes to training our puppy and teaching her new things. Hubby is somewhat helpful. He'll take her out to go potty sometimes but doesn't do anything that will reinforce everything I've been working on. Normally I have enough time with her so it doesn't really matter so much.

Everything I had worked so hard on was gone. She pulled me as I leash walked her. She's a big puppy at almost sixty pounds and five and a half months, too. She darn near pulled me over. When I was working with her before, I had stopped her from doing that.

You can get idea of her size from this recent picture. 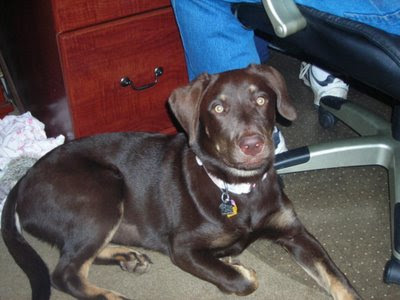 The next time I took her out this morning I was determined to start over.. from scratch. The most important thing being letting her know she is not the boss. We were taught that when she jumps or pulls too hard to step on the leash restricting her movement until she calms down or becomes submissive.

She started getting rambunctious so I stepped on the leash. She did not like that and struggled to get loose. I grabbed her collar to hold her still and she started clawing at my arm with her feet. I was able to get her to calm down. Or so I thought.

When I let her free she started jumping on me again. I step on the leash.. grab her collar... while trying to settle her down. This time she managed to bite me hard enough to leave bruises. (But not break the skin.)

(These don't show how bad it is. 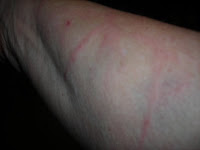 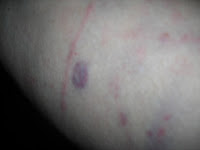 As I tried to step on the leash again, my foot got tangled up and she jumped and I went down on the grass.

I told hubby tonight that I would NOT have a dog that hurts me or could possibly hurt a child. That he is either with me on this or she's gone. I just won't have it and I can't do it alone.

Of course he apologized and said he forgets and blah blah blah. Wash. Rinse. Repeat.
Posted by Barb

As I mentioned....puppy training is not easy..and you both have to be on board in order to make it successful. I am so sorry you got hurt...that is not good. You would be correct in saying that she needs to be trained as you would hate it if she caused someone else harm. Give it another try...good luck..she is a sweet looking puppy...just needs a lot of guidance and training...

As I've said before - The proper training needs to be enforced by BOTH of you. I sure hope you can get her back on track - it would break my heart (and yours) if you had to get rid of her. :-(

Thats why i picked small dogs like my chihuahua so i can control them.
they can't drag a 300lbs woman around.

I know what it's like. I'd gotten the girls used to no more people food while Poor Hubby was gone, now Seven won't eat dog food 'cause she's holding out for the "good stuff"... *sigh*

Sorry you were hurt those bruises look bad and you were lucky not to get a bite. I agree you can't have a dog that can't be controlled.