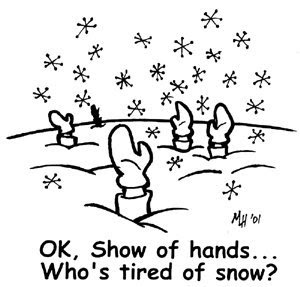 I found this on FaceBook and the person who posted it encouraged people to grab it.. so I did.

Too bad she wasn't offering free college student loans because I might have given pause to consider that as well. Maybe. I know two bloggers who are doing online college courses. Of course if I DID go to college it would have to be online. Hard to GO to college if you can't leave the house, ya know.

We don't get much snow where we live here on the east side of Michigan. An inch here.. an inch or so there. Nothing at all like we got on the west side of the state with all that LAKE EFFECT. We said it like that, too.. all in caps.

Hubby got a snowblower for Christmas and poor guy has only been able to use it once. That was just to clear the end of the driveway after the plow went through and he probably could have shoveled it but he had his new toy and wanted to use it. I watched him out the window and he was so happy and proud. I guess in that instance size didn't matter. To him. To use the snowblower.

We bought ourselves a wii for Christmas then took it back a few days later and got a PS3. The PS3 can do everything except wash cookie sheets and we both like it a lot. But... we miss the wii and are tossing about the idea of getting a wii again. Having both. Oh and we already have the xbox 360. (And a PS2.)

That's all the news for today.
Posted by Barb

Hubs and I don't have any gaming systems. I'm thinking we should - we might have some fun together!

We have both the Wii and PS3. I love the Wii, it's a lot of fun and a nice way of getting exercise without actually realizing your getting exercise. I still haven't tried the PS3 though as it's my brother's.

That snow at the end of the driveway is hard to shovel. We have a lot more snow than you do, but I don't really mind shoveling. I couldn't use a snow blower because of the gas fumes. I guess then my husband would have to do all of it...

so jealous right now I want a Wii so bad :( lol I did the University of Phoenix for a semester its hard lol but its a good way to go when there is not oher way to go to school, it wasent fro me though, this fall I go to UTA god willing :)!!

We could use a snowblower. I didn't even know they existed. I know leafblowers, but SNOWblowers? We haven't had this much snow in years. Will someone explain the warming of Earth to me again please? Anyway, we still like the snow, but not so much the shoveling.

And...we have given ourselves a Wii for Christmas too. We love it! I didn't know it would be this much fun. No idea what the other thing you've got instead is (I live under a rock), but I'm sure I would miss the Wii too.

you too are an enthusiastic reader I see, and a special place sandy