The later part of the first day found us off the Interstate and traveling the Lake Superior seashore on Hwy 28. Most roads will have rest areas. Some have scenic pull offs every now and then. This road had scenic pull offs very often. VERY. We found out why as the sun began to set. We pulled over, held hands and watched. To say it was a special moment would be an understatement. 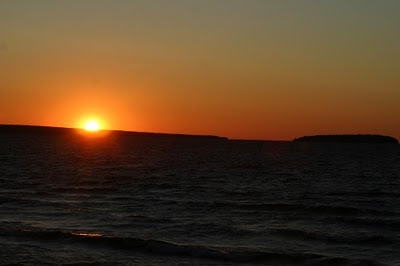 One other thing happened during the second part of the first day. I tripped stepping up on a curb and sprained my thumb. (This picture was taken once we got home.) I cried out 7dfbx or something perhaps a little naughtier because it hurt like crazy. Not enough to turn around and come home though.

We got a room across the street from Lake Superior that night and settled in. 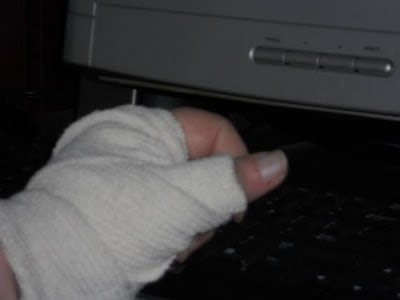 LOL--7dfbx--I should click on it just for you being so darned creative with that! Hope the thumb feels better soon.

Sprained fingers are not fun.

Such a beautiful sunset! Love it.

What a fantastic sunset! Hope your thumb is better soon!

I thought gravity didn't go on vacations... bummer :)
I'd give anything to take off for even one night, but not this vacation. maybe in the Fall.

OUCH! I'm sorry you got hurt, but I'm SOOOOO glad you and Mr. Skittles had such a wonderful trip!