This is a weekly meme for Hump Day - Wednesdays. Participants will post anything humorous: email forwards, pictures, happenings, or personal stories that go along with the question(s) and/or theme that is posted for that Wednesday.
----------- 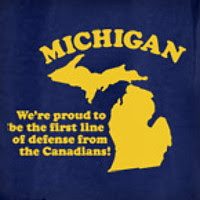 My second son was actually refused entry into Canada once. (This was quite a few years ago.. before he got married and settled down.) Here's what happened..

He and his friend spent quite a few weeks in the Summer helping friend's dad with his seasonal firework business. Well, one night they decided to take a road trip, which included going to Canada. It's not that far when you live in Michigan. (Laugh.)

The problem occurred because they tried to cross the border with a van full of fireworks! Apparently the Canadian border patrol didn't want explosives being brought into their country. Go figure.

Son and friend were ushered into a holding room while the van was searched. They were denied entry and told to turn around and go home. Which they did.

You can play this at Hump Day Humor.
Posted by Barb

Bless them! I guess it is a good thing for the patrol to check this-who knows what kind of people might have actually been on a mission with these explosives (not your son-of course)! *note to son: when working at fireworks stand-please do not ride around with the merchandise* LOL! Thanks so much for playing! I really appreciate it. This meme is a hard one to get going! Hope to see you at Scrumptious Sunday!

You're kidding! They wouldn't let them into the country with a van full of explosives? Geesh, what's this world coming too? ahahahahahahaha

As far as being the first line of defense from Canadians, how much can it cost to post 3 guys with slingshots at the border huh? lol

I bet they couldn't wait to get out of there! :)

I think that whole state t-shirt line is funny! But the story about your son? That's even funnier!