You can play this too at Heads Or Tails!

When I was growing up back in the Stone Age women didn't hold jobs, or if they did, they were secretaries, nurses or teachers. Nothing wrong with any of those, I just mean there weren't very many "Career Women" like today. Most young girls grew up with the dream of being a wife and mother, having a nice little house with a white picket fence.

I was no different.

My first job, other than babysitting, was working at a souvenir shop next to an Interstate exit ramp in Florida. We sold souvenirs (of course) and bags of oranges. Lots and lots of bags of oranges. And grapefruit. I was 18 years old, married and already had a son.

In the early 90's I became a school crossing guard. This was the perfect job for me with three kids in school because they were IN school when I was working and we had the same vacation days. I made good money for back then, too. ($10 an hour.) My employer was the police department and I had the authority to report drivers who "ran my sign" and a ticket would be issued. 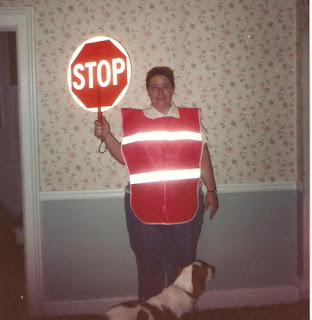 I was working my corner (giggle) one day when a photographer from the local newspaper stopped and asked if he could take a picture of me. Of course I said yes, and he did. The school superintendent sent me a few laminated copies from the newspaper article. They're in my storage unit in a "Keep" box, so I couldn't scan one to post here.

That was one of the last jobs I ever held because it was around that time that I started getting hit really bad with panic attacks, and then with agoraphobia which made me housebound for too many years.

I did however take a job that paid under the table around the year 2001. My younger son's friend's dad (got that?) sold fireworks in the late Spring/early Summer months. For a few weeks me and my daughter bagged and boxed fireworks in my apartment. 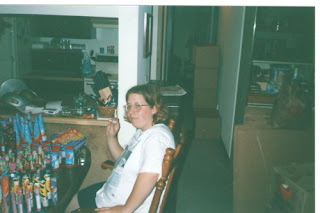 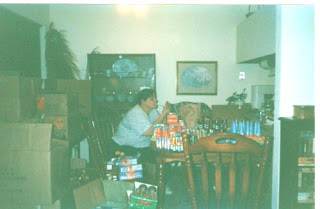 As you can see it made quite a mess!!! You may also notice that both of us are smoking while surrounded by a lot of explosives. Not too bright, huh? (Good thing I had medical insurance.)

Interesting jobs that you had :D

I think you look cool in your crossing guard uniform! As usual I'm an early bird. This is a fun meme though, and thanks so much for putting it together for all of us. :)

My entry is here

I love the photos and stories, Skittles! Is that a Basset at your feet in the first photo? I ahve a basset hound named "Theo" who looks exactly like that dog...except, well, he's more than 100 pounds...
Good to read you again! It's been a long time!
If you ever want to come visit Oregon, you've got a friend and a place to stay!

Hey they didn't mention bloggers in that video! hehehe

Oh gawd I love the orangeyness

I too chose a job with 'school'! Just to be able to be home when the kids were!!

My H o T is shared, hope you can stop by.

I'm job is up. Wish I could share more.

I remember the "Stone Age" very well. Our job was to get married and have children. I was in my 30's before I had a real job. Love the school guard picture!

wow, a school crossing guard is an interesting job plus the "flashy" uniform, you' re queen of the road. seriously, you should be proud that you were able to support your kids with your job then.
i'm a good jaywalker you know hahaha. the footbridge near our office is not quite near so everyday I have to dance with the running vehicles. heehee.
about the video, Iwanted to be a bartender and a milkmaid, yay! the last part is touching.
c",) Morning Sniffles

Yup … that’s what the high school counselor told me! Teacher, nurse, secretary … but wife and mother was ‘the right choice’ back then. Mine’s up … at Small Reflections. I’ll be visiting tomorrow afternoon once I return from my Photoshop Class ;--)
Hugs and blessings,

I saw a doggy!!! I saw a very pretty doggy! Can I come hang out on the corner with ya? hehehe *giggle*

Ummmm... speaking of jobs... I gotta go back to mine tomorrow - which means, I should be going to sleep, but I'm not asleep and I'm not thinking straight right now (I'll fill you in later)..... so, ummmmm - you gonna kick me to the curb if my HoT is late? Geesh, I'm really beginning to suck as a blogger! Yep, it's true - I suck.

I remember the stone age, it was all about keeping a job until you got married then you could stop working and stay at home and work harder.

you got some interesting job there.

I'm glad you didn't blow yourself up in that apartment, Barb. Great post. I love the video... love anything with country music, haha.

I have a great respect for crossing guards! :)


Smoking and fireworks...whoa!LOL! You were BRAVE! :)

i loved being a crossing guard at school! but i never got to hold the sign, which i thought was a great travesty.

That's the job I'm hoping to get. Something in our school system so I have the same days off as the kids.

Yup.. Kent Rubber is still around. They actually called me in for a few weeks last year. It felt good to see everyone again. They were surprised that I had remembered how to do everything. Did you ever go there? Wouldn't it of been funny if we had met each other in real life and here we never knew it. LOL

oh i love how you have the pictures for your jobs too. Thats fab!

I recall back in first grade we had to draw a picture what we want to be an at time woman didn't have many choices.
Well I drew a picture of an astronaut and the whole class cracked up laughing.

Thanks for stopping in.

I think you look A-Ok in your school crossing guard uniform! Keeping the children safe is a hard job at times.


btw need to apologize, I missed the last two HoTs ...

Lucky you got away without injury packing fireworks. I have a brother-in-law who became a plastic surgeon, specializing in hand and face injuries. He had a HUGE house before he retired -- and he was never around for his daughter's early July birthday parties... because it was always his busiest season.

One of my kids said just the other day that he remembered that house every time one of his friends invited him to play with fireworks... and the memory of how much money his uncle made patching stupid kids back together made it very easy for him to decline the invitation.....

Sounds like you had jobs without a lot of stress. I posted today about my last job, which was very stressful.

Have a good day.

Just a reply to the comment you left on my HoT. You said your hubby retired from Ford. So did mine, lol. Me from GM and Ed from Ford. If you don't think that makes for a happy home, lol. He worked for Nashville's Ford Glass Plant, and I understand that plant has been sold but is still making glass. We don't care as long as his benefits stay in place.

I've often thought once my kids are in school, maybe I'll be a crossing guard or something that will give me the same times and holidays that the ids are on....

Great Heads or Tails this week!

I love the idea of you guys happily smoking around the fireworks - glad no one got hurt:) I really feel for the crossing guards in our area during the Nor-Easters that hit during the fall - there's just no way to stay dry. My dispatcher days were done on Long Beach Island, in NJ. More and more people are staying down all year round, but the population still skyrockets once Memorial Day hits. Great for the local businesses (who basically rely on what they make in the summer) but not so great for local traffic:(

I love the idea of you guys happily smoking around the fireworks - glad no one got hurt:) I really feel for the crossing guards in our area during the Nor-Easters that hit during the fall - there's just no way to stay dry. My dispatcher days were done on Long Beach Island, in NJ. More and more people are staying down all year round, but the population still skyrockets once Memorial Day hits. Great for the local businesses (who basically rely on what they make in the summer) but not so great for local traffic:(

You look great in your crossing guard uniform. The crossing guards here work for the school district instead of the police dept. Did you ticket many people? Sometimes I wish I was a "career woman" but then again, I like my holidays and summers!

Interesting stuff! Most of my jobs were pretty darned ordinary.

WOW! You look so glowing in that crossing guard pinny. In England, people with that job are called "lollipop ladies/guards".

Too funny about the fireworks so I am glad nothing unfortunate happened.

Well, I have another house post. You can stop on over and have a little vacation and learn some history in the process.

Oh and sorry about the Blogger Burp on the HoT site/comments, I see someone here had the same issue.

Lots I could relate to in your post and quite a few memories sparked. When we were little my mum used to sew soft toys from home. There would be bags piled everywhere, and the atmosphere would always be filled with bits of fluff from the material. Great photos.

Another inspiring theme Skittles. I am really thankful for uniting us in a happy HoT meme. :)

You look red in that orange uniform eh? :p That's cool!!! being photographed by a local newspaper wheewwww woooowwww!!!!!!

Have a wonderful week.

Take care & more blessings to you. :)

I would have been a nervous wreck to have the two of you smoking around the fireworks! So glad you went on to become a blogger and brighten all of our days!