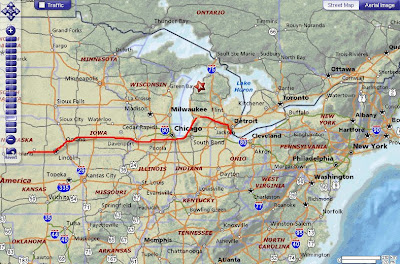 We left home late Sunday morning and went to hubby's sister's home (about an hour away) which is where his mom lives. It was her 80th birthday! After spending some time there, we went across the state, arriving around 4-5pm.

It was our original intention to drop off some belated birthday presents to the oldest grandchild, but that didn't work out. We did get to spend a little bit of time with my daughter, who was house sitting for my oldest son and wife. They were on vacation in Florida!

We left there around 6pm and settled in for a long night of driving. By midnight we were in Iowa and by breakfast time Monday morning we were in Nebraska. 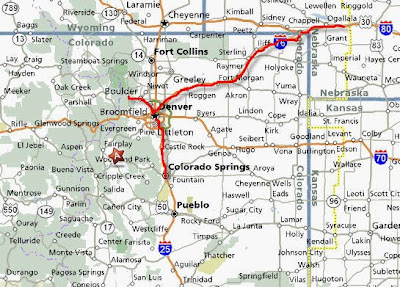 Not much more than twenty-four hours after leaving home we began seeing the Rocky Mountains off in the distance. We pulled to the side of the road to take the following pictures about an hour away from Denver.

I have to say here, that if any of you have never been in this area, you need to go! The pictures don't begin to do justice to the majesty and beauty of these mountains. In fact, as we drove on we were so overwhelmed by it all that we almost couldn't catch our breath. At one point my eyes even filled with tears and I had the sudden urge to begin quietly singing "America The Beautiful." 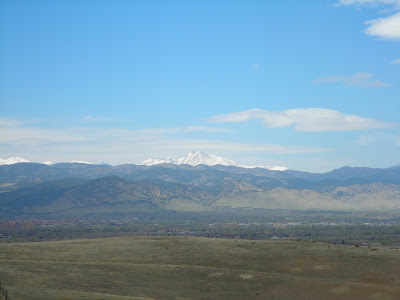 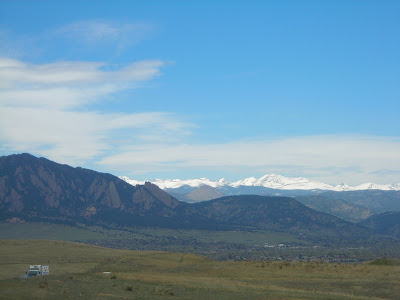 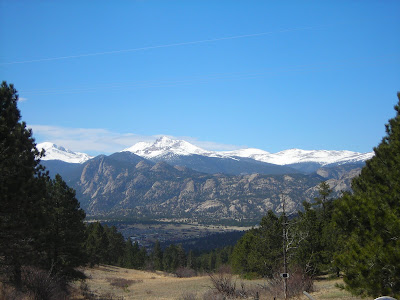 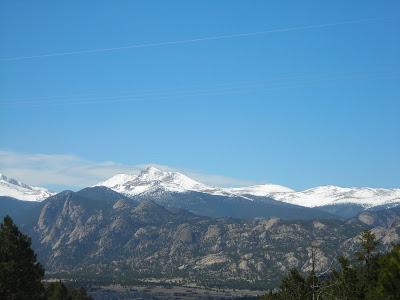 We arrived at our destination, The Rocky Mountain National Park (which was up in those mountains) a little before dinner time. 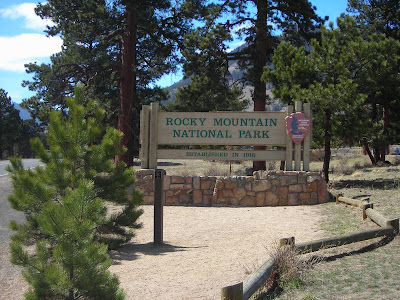 We didn't know at the time that most of the roads were still closed due to snow(!) but we were able to go up one road, which is where I took this picture of an interesting rock formation and one of hubby taking some pictures.

I don't remember the altitude at this spot, but I know it was pretty far up there and the air was a bit thin, making breathing a little bit of a struggle for an overweight smoker like me. Of course I was still "breathless" at the beauty of it all. 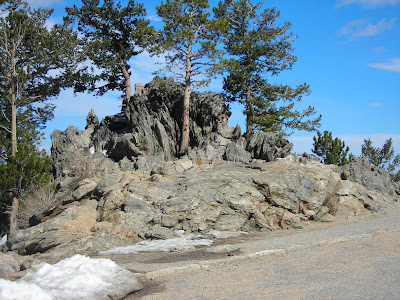 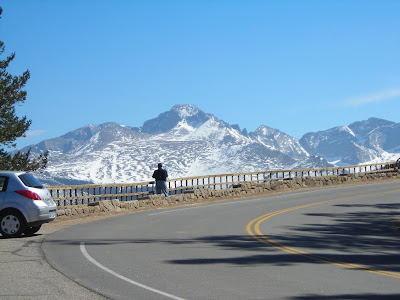 With most of the roads being closed, we decided to drive on to Colorado Springs, get a motel room and catch up on the sleep we'd missed the night before while driving.
Posted by Barb

Wow! I love those photos of the mountains. Even in photo they look so majestic :)

I love that area! Three years ago we set off from Michigan and drove to the Pacific Ocean!

Oh WOW that is just breathtaking! When I retire I just have to go there. :0

(I posted on my blog too in case you closed that window out - thanks for stopping by!)

I read your blog every day! (But usually by google/reader.)

Hopefully now that school is over I'll "get out more"...

(and I'll be available for coffee)

Oh...your statement on your "leave your comment" page is: I try to learn something new everyday. Today I learned yet another place not to put my Silly Putty."

Same goes for poster putty. Don't eat it, don't put it in your nose. Don't put it under the table where people will think it is gum - okay, it was a staff member who does this - so that one student always knows where to find her poster putty for her school paper...until one day it was gum.

Oh, what a fun trip for you!!! I'm spoiled to be able to live near the Rocky Mountains and would really really miss them if we ever moved away. I'm glad you were able to take a fun vacation :)

I am really glad that you went to Colorado, it's so beautiful isn't it? Thank you for the memories. :)

Some awesome "teaser" photos you posted there and I'm looking forward to more posts with more pics soon!

WOW! Wonderful photos, if ever I get to US I don't know where I'd choose to go, but this place is a definite yes!

Beautiful pictures! The last one is absolutely amazing view! Glad your back! :o)

Harry: I expected the Rocky Mountains to be a little rockier than this.
Lloyd: I was thinking the same thing. That John Denver's full of shit, man.

absolutely gorgeous!! i miss the western mountains so much!!! love them!! what a great trip it mustve been.

I am forever grateful that I am within driving distance of those mountains. They are my recharge. I told Poor Hubby last night that the best way to see me wither & die is to take me away from my mountains.

We went there when I was a teenager, I have not been since and would love to take my own kids or even just to go with Allen one day. Beautiful pictures.

It looks like you guys had some much fun!!!

I myself just drove across the country.. Cincinnati to Tucson!