We got her as a puppy when my oldest son was in 4th grade. (He's now 33 if that tells you how long ago.) I had seen a newspaper ad for Collie mix puppies.. and since our last dog had gotten hit by a car while someone was dogsitting for us.. I decided to send my now ex to go pick one out.

I waited at home all excited thinking it was going to be this adorable poof ball of cuteness. She wasn't. Did you ever read the children's book The Saggy Baggy Elephant? She looked like that, except the dog version, of course.

It didn't take her long to work her way into our hearts though. She was smart as a whip. She could outrun any dog at the park. She loved to swim and bark at squirrels. She always came when called, never left the front porch or back yard fenced area without be told she could. She knew the difference between being told to get her ball and being told to get her squeaky toy.

I used to have a habit of having my kids and their friends line up to be served buffet style dinners.. from youngest to oldest, and there was almost always extra people there. One day I called for everyone to line up for ice cream cones. I fixed the first one and turned around and there was Suzi was in line. From then on out I always fixed her a small cone when everyone else got one.

One other time we still smile about was when we were having a fire drill at home. Everyone got out safely to the designated meeting place outside and then I said, "What about Suzi?" One of my boys started to run in to get her, when I stopped him and explained that once out nobody goes back in. As soon as the words left my mouth, from inside the house, Suzi let out with the most pitiful mournful howl you ever heard!

When I was a Cub Scout den mother, she was the guinea pig for the boys to practice their first aid on. She didn't mind being used as a pillow for TV watching.

One year I allowed her to get pregnant by a full-blood Boxer. OMG were those puppies ugly. So ugly they were cute. You know what I mean, right? (Smile.) When it got time to find them new homes.. nobody wanted them. We ran ads and such. Only one pup found a home. The rest had to go the Humane Society. It broke our hearts and I swore then and there every other pet that came into our home would be spayed or neutered. I've kept that promise to this day.

When Suzi was around 15 years old she started going blind, was losing her hearing and had developed a couple tumors. It was a heartbreaking decision.. but we decided it wasn't fair to her to keep her just so we wouldn't miss her.. and we had her put to sleep.

All these years later she is still the standard by which everyone in my family measures other pets.

(Second son and Suzi. Oh no.. she never begged!) 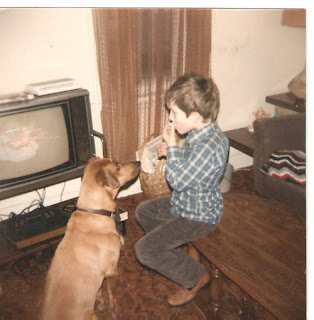 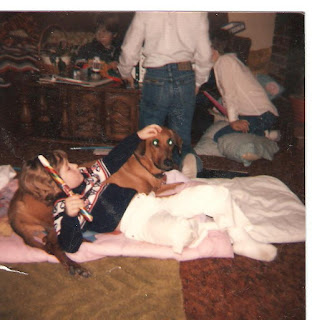 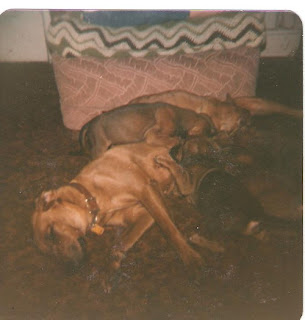 Visit mine also in here Thanks

Mine in here Thanks

a beautiful story! may she forever live in your hearts...

Suzi sounds like a wonderful fur-friend. Your memories of her remind ME of my first dog Ralph. Funny how much of our heart these ‘critters’ take up and how much we miss them when they’re gone. I shared a piece I wrote about our second dog (a Beagle) at Sacred Ruminations last week … One of a Kind. Maybe you’ll find time to drop by. Today I’ve got Molly and her friend at Small Reflections.
Hugs and blessings,

Lovely tribute - I know exactly what you mean by that special dog. She looks very special.

*Sniff* *blowing nose* *Sniff* I literally have tears streaming down my face. What a special post. Yes, I'm a sap... so what.

She sounds like she was a very special dog.

*sniff* Such a beauiful dog and awesome story to read.

reminds me of Luke, our lab... left in the Phils. oh how i miss luke.