There was one night when my daughter (who was still living with me at the time) was having a terrible asthma attack. I'd called paramedics and an EMT unit and a fire department group showed up. A few of them worked on my daughter while the rest doted on Cody who was winding his way in and out of their legs.

He did have one annoying habit. He always wanted to be on you. Not just on your lap. He liked to be almost right up in your face. He knew we didn't like this and we'd would often put him down, so he'd go into what me and (not quite yet) hubby came to call him being in "stealth kitty" mode. He'd jump onto a lap then ever so slowly, one small step at a time, start working his way up higher, all the while trying to be as invisible as possible.

Circumstances and living arrangements change and Cody went to live in a good home somewhere else. We still think about him and talk about him often though. 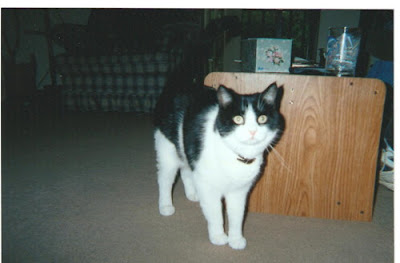 Here's a link for treadmills.
Posted by Barb

That's a great story about Cody. I had a tom cat move in with me two weeks ago. No name yet. Cody was such a cutie.

I like cats but can't have one here, not if they plan to live long unless it is a totally inside cat that is.

What a sweet kitty and great story! I’m allergic to cats so I can’t have them crawl on me. Fortunately Ms. Kitty is content to rub against my ankles ;--)

Thanks for visiting us at Small Reflections.
Hugs and blessings,

What a great story and a precious kitty. ((((Hugs)))) to you Skittles.

What a great cat and what an amazing story. :o)

Oh what a gorgeous kitty, I hope he's happy wherever he is..

Great story, and handsome cat! Happy CC Skittles and thanks for dropping by!

I love the story of the 'stealth mode' - I could just picture it and it was making me giggle.

Ummmm, don't tell Mike, but Mokey (the cat) just had kittens *hint* *hint* Shup Mike - you aren't supposed to be reading this!

You must miss him a great deal! Thanks for sharing him with us.

My Freddy cat has a serious need to be right in my face and there is no stealth about it!! ...and he drools...