*****************
As a parent, we all have moments that are so totally unexpected, that we can't imagine how we would ever manage to deal with them. But, somehow, we do. My HoT for the week describes one such time..

It was at the end of summer and Younger Son (6th grade age) had taken his bike to the nearby school property to ride. The property had a couple steep hills and Younger Son decided to be a daredevil and take his bike down one of them. Near the bottom his bike hit a rock.. Younger son went flying over the handlebars.. and skidded quite a while on his face.

I was sitting at home talking with a neighbor when in walks Younger Son. He was covered in blood and dirt and was almost unrecognizable and of course crying. My heart fell to my feet in less than ten seconds as he explained what had happened.

I don't remember if my now ex-husband was already home or if he was called home, but I know he rushed Younger Son to the doctor's office where it took quite a while to get Younger Son cleaned up enough to have his injuries looked at. It was awful.. unimaginable. Even the doctor had a hard time dealing with it.

Younger Son had practically skinned off one side of his face. His chin needed stitches. (I took him the next day or so to the optometrist because of the injury around his eye.) In follow-up doctor appointments talk of him possibly needing plastic surgery was a topic that was tossed around. Thankfully that never was needed.

The recovery was painfully slow it seemed. Younger Son slept on the sofa bed and I slept nearby so I could hear him if he needed me.

That was one summer I will never forget.

(This picture can be enlarged by clicking on it.) 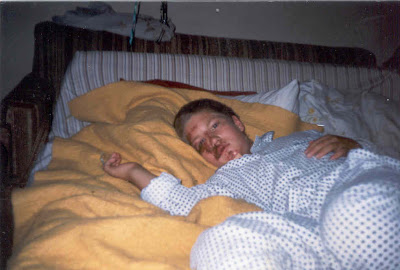 I bet you know the words to this summer song!

Great song I'm groovin to as I'm typing, but my heart gave a lurch when I saw the pic of your son. I think I would have freaked!!!

Happy HOT day, and thanks again for this great meme :)

Oh my goodness! That is really a bad memory but hopefully, your son is in better condition today all these years later.

Thanks for stopping by Penny Lane.
You are tops Barb.

Holy crap Skittles!!! That must have been horrific for you all!! It looks so painful. I have chills.

wow, your poor boy! i can only imagine how awful it would've been to see him walk through the door like that. i'm glad he was ok and didn't need plastic surgery! definately sounds like a memorable summer moment.

Oh, ouch! I bet it hurt your heart seeing him so banged up almost as much as it hurt him.

The poor thing. Hope hes recovered ok now. Bad memory for both of you isnt it that :(

There were a couple of years where I was certain we had a reserved booth in the triage room of the local ER. So I can identify.

And I enjoyed the memory from Grease.

Oh my goodness! Boys! LOL I would have had cried right along with him.

the boy must have been so scared.

Oh, poor baby! What a summer memory that is.

A horrible summer memory... I also fell from my bike with my cousin when I was in elementary, the tricycle drivers laughed at us and we were scolded by our uncles... sigh.
Then I fell from a motorbike with a friend when I was high school... glad I'm still in one piece after all... literally and figuratively.

Wow, what a memory... Must be a 'boy' thing! My brother had a similar injury as a kid after attempting to skateboard on a gravel driveway on one of those things people slide under a car on. Although I'm sure it didn't strike me in quite the same way just as his older sister. :)

Oh wow, that looks painful! I had a similar accident when I was younger, but luckily it was only on my left cheek. As it healed, it began to look much like a potato chip... and soon everyone was calling it that. :)

My daughter was roller-blading home from school one day, and giving the little sister of one of her friends a piggy-back ride. Who gives piggy-back rides on rollerblades? She hit a rock in the road and fell on her face. It wasn't quite this bad, but she didn't look pretty.

as a mom, i know how you felt.

thanks for the visit and a lovely HOT for this week again.

Seeing the photo of your son reminds me of a summertime accident I had as a kid that left me looking much the same. Scary timez when stuph like this happens. Glad everything turned out okay.
Hugs and blessings,

Love the tunes, still singing as I type this!!!

I can't imagine how difficult this must have been! Wow! I absolutely freak out if one of my step-children or one of my dogs is injured - and I didn't give birth to them!

ouch it sound and looks painful.
Glad he recovered.

Love the idea, and I love the memory you've shared. It had to be more than a little nightmarish at the time!

The good, the bad and the ugly - a memory is what you make of it.

I have arrived safely in Northern Ireland. I am at a library at the moment. Hopeful get a phone line in tomorrow and internet next week.