In the post Tarp Fun, I wrote about my kids using their imagination to create a "swimming pool" in our basement. Some of you asked how we emptied that pool..

The basement was unfinished. It had a cement floor with a (peeling) coat of paint. The floor had a small slant to it and the water ran down to a drain.

Now you know. And according to the old G.I. Joe cartoon, knowing is half the battle.

The song "My Way" starts with the line "Regrets, I've had a few." I've had more than a few regrets in my life. Some (most) of those fall under the category THINGS I'VE MISSED DUE TO AGORAPHOBIA.

I thought I had beaten that evil beast Agoraphobia. I was wrong.

One of my granddaughter's birthdays was the 13th of this month. When I found out the party was to be this past Saturday and at Chuckie Cheese, I hardly gave it much thought other than planning to go over.

Back when I had full blown Agoraphobia, excuses were my thing. It was so much easier and convenient to have a handy excuse rather than trying to explain my issues. So as the day drew closer and closer and I saw I was having difficulties visualizing myself being at Chuckie Cheese, I found myself starting to make excuses for not going. (It was too cold out.. I had what might be the flu..)

I knew I was in trouble.

As many places that have opened up for me in the past couple years, Chuckie Cheese is still off limits. Yep.. I'm skeered of the Chuckster. For some unknown reason I always have been.

I wrote my son and told him the truth and expressed my regrets. And missing the 3rd birthday party for my granddaughter is now placed in the THINGS I'VE MISSED file. 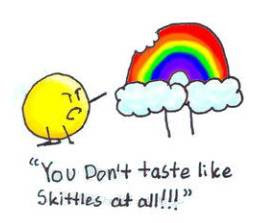 I don't think an aversion to places like Chuckie Cheese's counts as agoraphobia. Or, at least, if it does, I share it.

We used to have a Little Caesar's by us that included a big party room, complete with a giant gerbil habitat (kids crawling through tubes) and all sorts of other games. You could hear the shrieking from the parking lot.

And, sometimes, when the kids were much littler of course, I had to go in there and rescue them from birthday parties to which they'd been invited.

It was Brutal. (Capital B originally unintended, but seems appropriate, looking at it now.)

Don't beat yourself up over this one.

Aw shame you missed your grandaughter's party Barb. Hopefully you will make the next one eh? :)

I make excuses to avoid crowds or large groups of people, so I can relate. (((HUG)))

Mentioned you on my blog today.

I refuse to drive up town because there is way too many people and cars. LOVE the cartoon of the rainbow!

I just noticed what you're reading! John is reading that too! Aurora bought it for him for Christmas because he loves Stephen King novels.

Chuckie Cheese is too loud for me and too many people.

Somehow I don't think missing out on Chuckie Cheese counts. That place is SCARY. I don't think I could bring myself to go in there no matter what the circumstances are.