My (evil) stepdad has been on my mind for the last couple months. Even though he's been dead since 1972, his memory still haunts me from time to time. The last week+ has been overloaded with thoughts from that time in my childhood.

Tossing around the idea of visiting the Grand Canyon on our recent vacation didn't help. The Grand Canyon will always have significance to me. Here's why.

My (evil) stepdad started molesting me when I was seven years old during a weekend visitation at his and my mom's house. (My parents divorced when I was four and custody was given to my dad.)
That's me on the left at about seven years old. The abuse continued sporadically for the next three years. Then when I was ten years old, my dad passed away suddenly and custody reverted to my mom and (evil) stepdad. With me under his roof.. the abuse increased.

Fear and shame keep victims quiet. This is probably as true today as it was back in the 60's. Back then though there were no hotlines or anything. Shit. I don't know why I feel compelled to explain here why I didn't tell anyone.

Anyway, in 1969, we took a six week vacation around the country. One of our stops was at the Grand Canyon. Me and my older brother slept on one side of the pop-up camper. My mom and (evil) stepdad slept on the other side. During the night (evil) stepdad came over and fondled me. Right there. With my brother sleeping right next to me. With my mom sleeping not more than a few feet away. 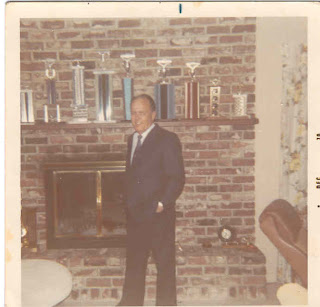 It was at that point that I knew he had no boundaries.. that no place was safe for me. I began thinking how I could tell my mom and when. The "when" happened about a week later when we'd stopped at a relative of (evil) stepdad's in Michigan.

To make a long story a little less long, I told her, he denied it, they argued. We went home. Nothing changed. (In fact he was so determined one night he kicked down my locked bedroom door.) It ended with his death from a heart attack when I was fifteen/sixteen years old.

Back to the Grand Canyon.

The idea of us going there was something I was not sure I would be able to do. Hubby knows why, in fact he knows all my childhood stories, yet he hasn't ever been there and I wanted him to see it. I was hoping maybe by going there I could break the spell, the bad connotations I have with it.

"Don't cry out loud
Just keep it inside,
Learn how to hide your feelings
Fly high and proud
And if you should fall,
Remember you almost had it all"
What if all those many years I hid my feelings.. never allowing them to show? What if, despite years of therapy, there were still some that needed to come out of hiding? I imagine that I would feel as scared, angry, sad, confused, etc. as I do right now.

Healing can and does takes place. But the scar still shows. And sometimes when you look at it, you remember how it got there.
Posted by Barb

Trust me, I know how hard this was to write. As you know, I've written about my childhood and adolescent difficult times. I initially started writing that, because you asked me to share my story with you - so, I started writing, and I kept writing and writing. It eventually became so long that I never even sent it to you. However, although I had so many emotions while writing the story, it was extremely therapeutic for me. As I wrote, more and more things came to the surface and I 'got rid of them' (the molestation, the hatred, the emotional abuse) by writing the down. I have you to thank for prompting me to do that. I just wish I knew of a way to help you 'get rid of it' so you wouldn't be haunted and tortured by this stuff. You're such a special friend, and it hurts me to know that you hurt.
(((HUGS)))

I'm so sorry for you. So sorry!
And I so hope that your ability to write about it helps you in dealing with this horrible episode in your life.
I feel so sad for you.
Lots of love and hugs,
Carolina

You think that after all this time it wouldn't trouble you so much but I know it never really goes away does it honey? xx

I wish there was something I could say, my friend. I wish all of us could just permanently purge the memories that haunt us. ((hugs))

oh Barb, this has me in tears and I am so Proud of you for sharing this with the bloggers whom you know are here to love and support you. I think It is so so difficult, painful and heartbreaking to look back.. but I also KNOW sometimes we can ONLY move forward by taking that final look back, absorbing all the pain and then using that painful energy to push forward and being able to use the energy to do greater things! Please click that book on my site and listen to Dr. Lerners Youtube. I know it's short but his message is so powerful and true.
He has helped me take so much negative and difficult 'stuff' and try to put a positive spin on it.
I think You are getting on with your final stage of healing with this trip to your past.
BIG hugs! xoxox

Barb, you are a BRAVE woman to share this. Doesn't it surprise you sometimes that you continue to have the strength to go on? Yet here you are!! That tells me that, not only did you manage to become a courageous woman, but one who was not broken. (You may lose a few parts and pieces sometimes :))
I hope your husband and family are doing well so you can all give each other the care that you deserve.

I had someone once tell me to write it all down and then burn it! The symbolic act really does help.


I admire your continued efforts and courage. Take care.

Definitely courageous - it takes a lot of strength to recall and relive something that must be so painful. I would say that you are certainly on the healing path. Big hugs -