Someone's In The Kitchen

Remember the song I've Been Working On The Railroad? Well.. my family was a bit twisted (I think they got it from me) and when we'd go camping that was one of our campfire songs. That's not the twisted part.

I'm not sure why that popped into my head just now. Maybe it has something to do with some donuts I made today. The donut holes are always the best, aren't they????

Especially this chocolate sugar & cinnamon one.. 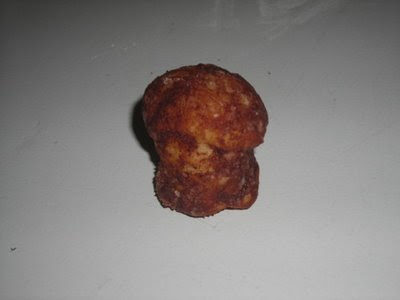 Hubby said he didn't notice the similarity between the donut hole and something.. else. (I almost feel dirty saying "hole" around this picture.)

Maybe I noticed because I used to sing campfire songs with my kids.
Posted by Barb

OMG - sometimes you absolutely kill me (in a good way)... while these 'holes' might be a big embarrassing, they sure look SUPER YUMMMMMMMMMY! Where's mine????? GGGGGGGGGGGGGGGINAAAAAAAAAAAAAA?????????????????

Oooops I meant "bit" embarrassing... talk about a typo!