I've posted a couple times here and there about Mr. Skittles wanting to see a real moose.

The first time this became known to me was a few years ago when we visited Yellowstone National Park. We saw a moose while driving the roads there and he pulled over, jumped out of the car and snapped a zillion pictures. Ok.. that's an exaggeration. When we were looking through the pictures later at home I said, "Dear, I think that's an elk." He was crushed.

Later that year he had a four day weekend. I Googled "best place to see a moose" and other than zoos I saw that New England, specifically New Hampshire, would be a good place. We threw stuff in the car and off we went. We drove around New Hampshire, then for good measure, we also drove around Vermont and Maine. No moose. We met a lot of people who HAD seen one, though.

Last weekend we went for a drive around Michigan. Imagine my surprise when I spotted this moose just standing there by the side of the road!!! (Shh.. Don't tell Mr. Skittles it isn't a real moose.) 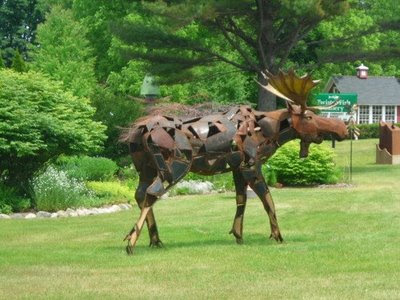 Thanks for your note about adding me to the blog! thanks so much for doing that!!!
Hugs
Lani