I think it was Bob Dole who brought the problem now referred to as E.D. to our attention. I used to think his arm was that way from an old war injury, but now I'm not so sure..

Just like we got used to seeing ads for tampons and such on TV, I suppose in a way we got used to hearing about E.D. and of course Viagra. "If your erection lasts longer than four hours, seek medical attention." I bet at first guys were thinking if they had an erection that lasted four hours, they would fall to their knees and thank God.

I suppose after they figured out how serious that could be, they may have thought about calling someone like a Lexington personal injury lawyer. Who knows.

Lately I've been seeing an ad a lot for something called ExtenZe. Have you seen this? This product is supposed to increase size AND performance. Geez. Viagra never claimed that.

One of these ads shows a woman with her laptop computer reading emails she the company had received from satisfied customers. An email from one man said he had reached his goal as far as size went.

Yeah, right! Let's be honest. Do any of you know any man anywhere that would say, "I like the size of my Mr. Johnson. No.. I wouldn't want him any bigger"???

I didn't think so. 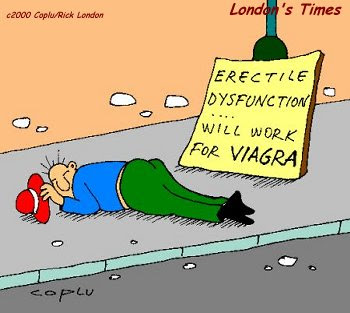 Not kidding... a Cialis commercial is on RIGHT now! lol we have been seeing a TON today! (i think i must be b/c of valentines day!!!)

Sometimes Barb, I do think you really are one crazy, sick puppy! I snickered the whole way through this post! But I gotta say this too, if I ever encountered someone with an erection lasting four hours, I would be on the warpath trying to track down the inventor of the product responsible for that deal! Four hours! My God! The horror!
Peace.

Love your new blogheaderpicture (don't know what the correct word is, but you know what I mean).

LOL on your post! Great stuff. Who posed for the picture? Do you know him?

LOLOL Oh dear Barb! Whatever must you be thinking of this fine Valentine weekend?! hehe
Love your new header!
:still snickering here:

You crack me up! As you know, your sense of humor and ability to just 'say it like it is' are some of my favorite things about you!

Erika: LOL at it being tied in with Valentines Day.

Jeni: Didn't you know that about me already??? :P

Carolina: I think "blogheaderpicture" is good enough. It was my husband who posed. 'Cuse me while I go laugh... ;)

Tookie: Glad you enjoyed it!

Misty: You have some abilities, too, ya know. :P

When those silly ExtenZe commercials, or the (...which one is it with Smilin' Bob?) ones come on, I look @ my husband & hope to goodness he isn't making any plans. Those commercials make me so nervous.